The hardest thing about the road not taken is that you never know where it might have led.

In this section, you will find information on the places I have visited that I hope will be especially useful to senior travellers.  The idea of such a section has been in my mind for at least ten years and stems from an encounter I had in Bali with a young traveller called Ben.

I was having lunch in the Kafe in Ubud in Bali.  It was even more crowded than usual and a waiter asked if I would mind sharing my table with someone.  That someone was Ben,  an American yoga instructor who lived in Israel but who was on his way to Australia where he was to teach yoga to some athletes.  We not only had lunch together but subsequently did an Indonesian cooking course together.

“Where would be a good place to hang out and do Yoga on my next trip”.

“Head for The Sanctuary on Koh Pha-ngan in Thailand”, Ben replied.

Of course, I had heard about Koh Pha-Ngan, the full moon party island but I did my research and read about The Sanctuary, which seemed to be a great spot for yoga.

So the next December I planned my getaway to the island Ben had waxed lyrical about. 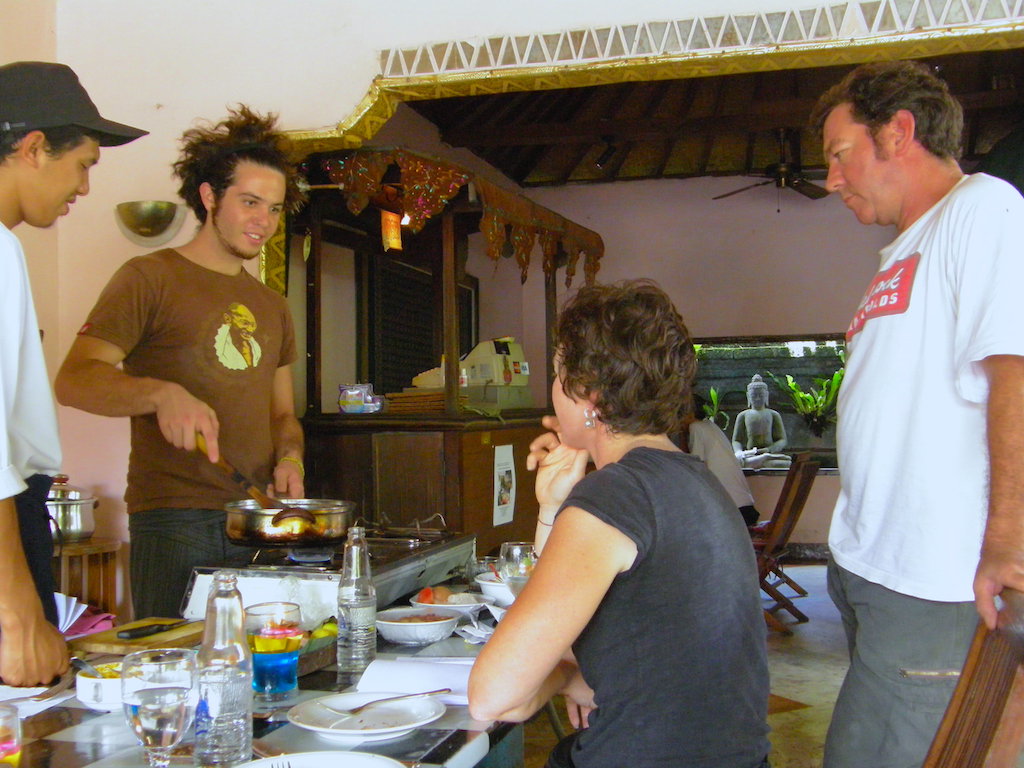 I flew to Koh Samui and took the Big Buddha Ferry to Koh Pha-ngan.  I disembarked the ferry at Haad Rin town and found Sunrise Beach where you catch another boat to Haad Tien Bay, which is the location of The Sancutary.

Now the boat to Haad Tien Bay was propped up on Sunrise Beach waiting for passengers. The boat looked vaguely like a pirate ship you would usually see in a Disney movie.  This should have been a sign.

There was no dock, just sand and a ladder to climb aboard.  This should have been a second warning.

Eventually, a hoard of young backpackers showed up.  This should have been my third warning.  We hauled ourselves aboard by climbing the ladder.

Soon the water in the Gulf of Thailand became choppy and although I like to think of myself as a good sailor, I was beginning to wish the trip was over.  We arrived at a spot where I could see the sea was churning over a beach studdied with very large rocks.  The young ones made a start to gather up their backpacks.

“Come on,” someone said and I finally twigged that this was our destination.

I gazed at the churning beach and the very large rocks and watched the young ones launching themselves into space from the bow of the ship.

“I go back with you,” I shouted to the captain.

“Impossible”, was the response. “We go round the island”.

Before I was really aware of what I was about to do, a young one grabbed my pack and tossed it to the shore.  Two young men grabbed me by the arms and we lurched like drunken sailors across the heaving deck.  They positioned me on the edge of the bow with my feet swinging widely over the surf.

“Go, go go”, I heard as I launced myself into space.  How I missed the rocks, I will never know.  Similarly, how I wasn’t soaking wet, I will never know. Not to mention a broken leg or two.  I crawled up the beach, laughing like a maniac and retrieved my backpack from a young couple whose smiles split their faces in half.  With heart pounding wildly, I hauled my bag on my back and followed the young crowd through a path in the jungle to a reception desk.

My travail was for nought.  There was no room at the inn.  And no rooms available anywhere else around the bay.

“See that jeep over there,” said the receptionist. “He will be driving back to Haad Rin as soon as he has loaded.”

I watched the jeep like a hawk and as soon as a guy ambled over to it, I was there in a shot.  I don’t recall what I paid but at least I was on board and with a front seat not scrunched in the back with all the empties he was carrying back to the big smoke of Haad Rin.

We drove on a dirt track through the jungle until we came to a place where the track rose vertically like a red ribbon through the trees.

I looked at the driver who had slowed to a crawl.

“Really,” was all I could muster.

I shut my eyes and hung on for dear life as he gunned the engine.  The jeep rose on the track as if winched upwards.  I kept my eyes closed until the momentum slowed and I realized we had reached the top.  We cruised into Haad Rin, I found a lovely place to stay and hardly ventured anywhere for a while.  That was too much of an adventure even for me.

Funnily enough, on writing this piece, I was unable to find any photos of the boat, The Sanctuary, the jeep or the red mud track through the jungle.  Not sure why!  But I did decide to (someday) write a blog for senior solo adventurers to warm them about young yoga instructors and cooking classes in Bali.

Bye the way, I was only sixty three when I had this adventure.